We started a writing group today on campus. There are four of us. Three of us are meeting today. We decided:

My writing process is so messy. I don’t know if I am built for a writing group. I am hoping the social presure will keep me writing every day.

So I just finished this remix. It is for #walkmyworld.

I started by first reading and annotating my two sources. Today I stole from JPG’s Anti-Education Era and Marlene Scardamalia and Carl Bereiter idea of knowledge communities

I wanted to play with Gee’s work so I made a series of Gifs. One for each element of the circuit of reflective inquiry. Gee’s premis is that we are dumb alone but groups and tools can make us smarter…if we engage in the circuit of reflective inquiry. To make the gifs I just held my smart phone and used an Android App Video to Gif. Took some experimenting to get the file size down.

Then I found images from #walkmyworld to remix with Scardamalia and Bereiter’s work. All of the words are straight lifted from here.

I then end the obligatory think on this questions.

I was trying to write a post of literacy and identity. It began with a search for google scholar. My computer smashed. I don’t have access to my curated literature. Not that it is tagged well. I need to get better at.

I didn’t happen. I got sidetracked into a more meaningful multimodal musing.

After going back to the slideshow by Rick Beach about #walkmyworld I decided to use it to frame my piece.

That and it was too late to write a post heavy on digestible academic discourse. Besides when I usually try to cook these up I end up with a burnt turkey burger covered in vegan cheese.

I also had remix on my mind. Laura Hillinger had posted a query to #teachtheweb about remix lessons. I shared some previous ones I did but I wanted to give it the old college try.

Who’s got a project about remixing literature that I can steal from? @writingproject? Got a link? Some plan? An Etherpad? #teachtheweb

Finally I wanted to make a Zeega for #walkmyworld. We want folks playing with images and identity. So I figure let me play and co-learn.

I had a bunch of PDFs open. One of those happened to be Donna Alvermann’s piece I decided to use that piece as well.

I find remixes easier when they are anchored in more than one source or idea. It makes metaphors easier. This gets you away from literal intermodal concurrence and lets you play with meaning.

I wish I had my old computer. I would have recorded the creation process, but I will try my best to recount here: 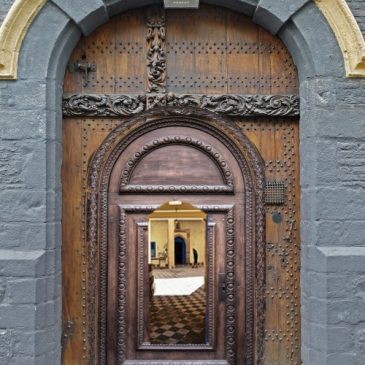 I needed to make an image for #walkmyworld. I wanted to do a series of cascading doors and then an open image into a room. It is a loose metaphor for hwo we step in and out of different identities.

I first went to flickr. I start with their creative commons page, It doesn’t work well. I click on CC BY-SA and then use a search term. I am looking at just CC BY-SA right? Nope. If you look carefully you have all licenses. You have to reselct CC images and then look closely at the license to make sure you can use and reappropriate the image.

I am big on crediting…well trying to get better. I tried this time I really did. I had every image open in a different window and then I tried to favorite them. I wasn’t signed on and Flickr wouldn’t let me sign in becuase I had a Yahoo (fantasy) and a Gmail (Flickr) account,.Signed in, lost images. I would have credited….Promise.

I used pixlr editor a free editing app available in Chrome (maybe Firefox too I haven’t checked). It is a great program and does almost everything Gimp or Photoshop did.

What I would do differently.

I got really close. I just can’t get my columns to float correctly. Click on remix to see the code. This is pretty much the first thing I ever wrote from scratch.

If you want to help me figure out my error. It will be appreciated.

Things left to do:

I am applying for a grant to start webmaker clubs in New Haven libraries. I have been thinking about my curricular map:

Learn about HTML while putting yourself on the front page.You will:

This aligns to the following competencies in the web literacy map

Learn how to change the color and placement of text using CSS.

Design a business card for your digital identity: You will:

This aligns to the following competencies in the Web Literacy Map

Learning Activity Four: Make an About Me Page

We will now apply all that we learned and create an about me page you will:

We will practice our CSS layout to make a poster about one of your favorite quotes. You will:

In this activity you will apply what you have learned about CSS layout to make a fake facebook page for a character from a book, a hero, or a historical figure.You will:

Performance Assessment: Create a Portfolio of your Makes

You will now use all that we have learned and the code in the learnlayout.com tutorial to build a website to show off your makes.

In addition to all of the other composing competencies covered in this module you will:

Webmakers who successfully complete of the portfolio can apply for the composing for the web, remixing, and design and accessibility badges. 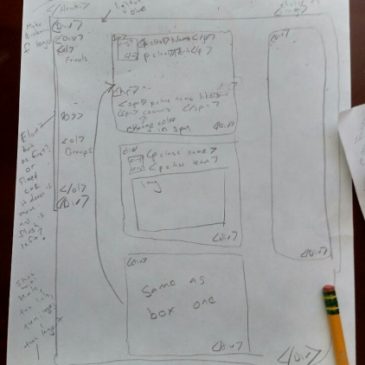 File this one under pitch.

I said my next #youshow would be about CSS animation.

I changed my mind. I need to learn, and by that I mean teach, layout.

I am going to use http://learnlayout.com to build a spoof facebook page.
…

This is my first post in the YouShow series. I will not have time to keep up the the class, but I make stuff online (but I break more). I originally wrote the post on my front stage blog but the comments are so meta and the writing so stream of thought I felt it needed its own place.

This blog title is in reference to embodied nature of writing. My process is so hard to document. I could get transfixed on an idea walking the dog, playing with kids or sitting in my porcelain office.

My ideas are usually well past my skill level so writing then turns to a mixture of caffeine, cursing, and throwing things.

Since we want #walkmyworld participants to create content we also want them to  to understand the rights of makers. I decided to make a  a tutorial (mainly because I needed to learn about CC and ontainers to overlay images.)

I I do not know how to write HTML/CSS. I just steal code from elsewhere. Then I tweak it for awhile. Throw something. Walk away and posts pleas for help all over the web. That is my workflow.

This make began with me trying to learn how to add an image on top of an image in CSS. That may have even been my search terms in Google. That brought mehere.

I scrolled through the CSS and saw the multiple image overlays and thought, “That would be cool to display all of the images of CC licenses.” I figured I could do it….So I copy pasted all the code. (I still don’t know why some selectors have the same name .multiPic followed by .text1). I just new I could change the background url.

It worked. So I decided let me find one image for each of the Creative Commons licenses and add an overlay for the license and the attribution.

Then things started going wrong. I didn’t want the image url in the background of CSS. I wanted CSS that would allow me to drop in images and switch the license. Being hidden in a style sheet did me no good.

So I posted this message on discourse.webmaker.org hoping someone would respond.

(Note: I need to learn how to post code in spaces that  take markdown. I tried blockquote but it still formatted).

Then  fourtonfish responded. He defined some key terminology for me, gave me some resources (I ignored the tutorials…for now…but he inspired me to keep hacking away. Using my growing understanding I found some tutorial (couldn’t find it in my history..I tried so many)  that got me to make one div  container and put the other three divs inside of it.

It worked! I now know enough about overlays and containers to play.

…..well except the hover. So I posted another message to @fourtunfish on discourse.webmaker.org. He called me out for ignoring the tutorials and then fixed my code.

I went in and added the correct code and I did it. Just had to search for the images and copy the code a few times. I then went back into the code to add my comments. I am trying hard to use clear instructions. (I am also

I tried to add the CSS to my wordpress stylesheet. I was able to save it to the stylesheet but when I tried the html code on a page or a post the images did not overlay. That is my next task. Luckily my Wordpress theme comes with great support and Bryan Hadaway of CyberChimps is helping me try to solve the issue.

I really want the tool to work. I like to put the license in a caption or right on the photo.

Next Episode Teaser: fourtonfish also forked my original code to show me how simple animations can be in CSS. He sent me some tutorials that will take me to   and now I want to learn how to animate stuff: